The chief of a major American hedge fund thinks that Bitcoin (BTC) won’t be seeing a massive bear or bull market from now on. This means that the largest cryptocurrency’s movement will be less volatile moving forward.

Pantera Capital CEO Dan Morehead shared his views about the major Bitcoin price cycles in a blog post. Morehead said that the more institutional ownership of the flagship cryptocurrency and its coin having a higher market value will eventually result in moderate price swings.

“While we’ve had two -80% bear markets already, I believe those are a thing of our primordial past. Future bear markets will be shallower. The previous two have been -61% and -54%… Unfortunately, there’s no free lunch. The flipside is we probably won’t see the 100x rallies anymore either.”

Morehead asserted that we’re done with the current bear market and Bitcoin will be moving into a new rally cycle.

“The next 6-12 months are likely to see a massive rally as investors flee stock, bond, and real estate markets – for blockchain,” he added. He also showed data on Bitcoin’s bull and bear markets price increase and decline since November 2011. 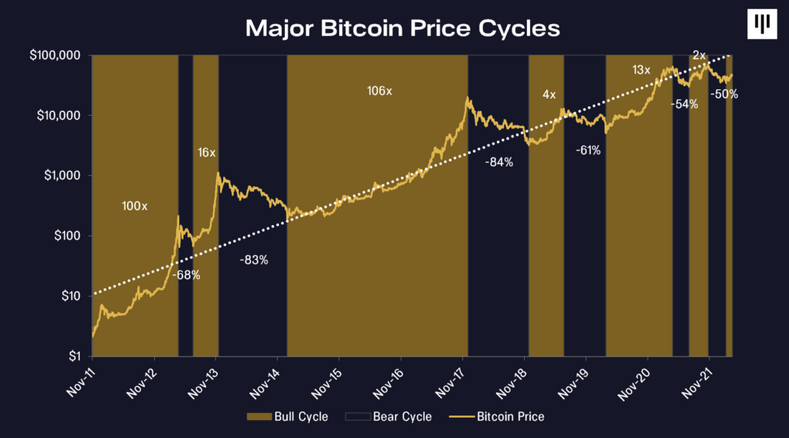 The company’s highest-ranking executive also mentioned that BTC was 56% below the 11-year exponential growth trend. He believes that the Bitcoin market has been “rarely” cheap according to the trend.

At the time of writing, Bitcoin (BTC) price is trading at $40,400.00, as per CoinMarketCap. It has more than $768 billion in market capitalization.