Bitcoin and Crypto Users To Reach 1 Billion by 2030 In the next 10 years, the number of people using Bitcoin and cryptocurrency is expected to reach 1 billion. This is according to a new report by bitcoin’s research wing Bitcoin archive.

A report, titled “Cryptocurrency: The Future of Money?” further argues that the mainstream adoption of Bitcoin and cryptocurrency will be driven by three factors: the millennials, the underestimated, and the unbanked.

The report says: “By 2030, we predict that one billion people will have some form of cryptocurrency wallets, whether through a central bank-issued digital currency or a decentralized cryptocurrency like Bitcoin.” 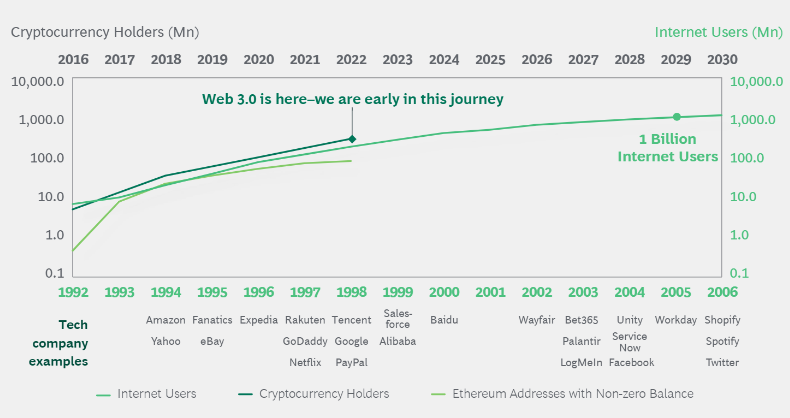 As for why this will happen, the report points to three key groups of people who will help drive the mainstream adoption of cryptocurrency:

1. The millennials, who are “digital natives” have grown up in a world where technology is constantly evolving. They are also more likely to be comfortable using new technologies and are more open to new ideas.

2. The underestimated – which includes women, the unbanked, and people in developing countries. This group is often overlooked by the mainstream media, but they are “just as important in terms of their potential to drive adoption.”

3. The unbanked – who are people without access to traditional banking services. They are often underserved by the traditional financial system and could benefit greatly from cryptocurrency.

The report also argues that cryptocurrency could have a major impact on the world economy. It says: “In a world where one billion people are using cryptocurrency, the economic implications are significant. For example, if even a fraction of these people were to use cryptocurrency for everyday transactions, it would reduce the demand for traditional fiat currencies and could lead to inflationary pressures in some countries.”

So there you have it. The next 10 years could see a huge increase in the number of people using Bitcoin and cryptocurrency. This could have a major impact on the world economy and the way we live our lives. It will be interesting to see how things play out.

What do you think? Will the number of people using cryptocurrency reach 1 billion by 2030? by Munene Kelvin 6 hours ago by Jesus Dawal Jr. 14 hours ago