The Rise and Fall of Aptos: Will APT Price Recover? The heat was undoubtedly on for Aptos to fulfill its promise of offering extremely quick transaction speeds as the negative buzz surrounding the firm grows by the day.

In a comment on their own article, Twitter user ParadigmEngineer420 said that the network was only processing four transactions per second on October 17, 2022, the day of the Aptos Mainnet launch.

Additionally, according to Aptos, following the Mainnet launch, the APT tokens of its key contributors and private investors would be locked up for a period of four years. These tokenomics have caused others to comment, with many saying that this could very well turn away potential customers.

Early on October 19, 2022, Aptos initially appeared on the open market, valued at around $8.85. It quickly dropped dramatically, reaching a low of just under $6.69 a few hours later, before recovering over the rest of the day to reach about $7.90 in the early afternoon. 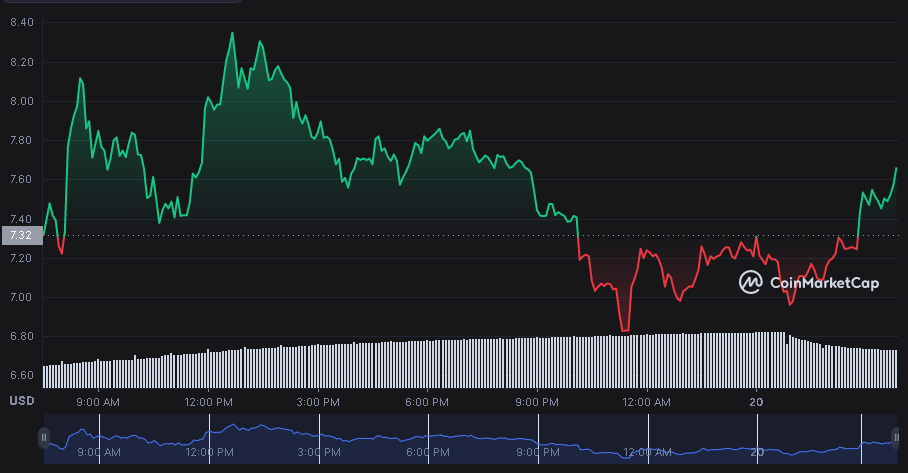 At the time of writing, an upward trend in the price of Aptos has tested with a steady momentum according to CoinMarketCap. The key support is currently at $6.83 with the current price placed at $7.66. Technical indicators are pointing in the green zone with a price percentage increase of 5.3%.

Disclaimer: The views and opinions in this article belong to the writer alone and they do not necessarily reflect the position of CryptoNewsLand (CNL). No information in this article, whether expressed or implied, should be taken as financial advice. Remember that investing in cryptocurrency poses significant risks to your asset. Hence, CNL strongly recommends all readers perform their own in-depth research before investing in cryptocurrency. by José Gustavo 6 days ago Metrics: Bitcoin Is More Stable Than the Stock Market